The Setup-Payoff Model of Storytelling

From the Ascentive writer’s corner: 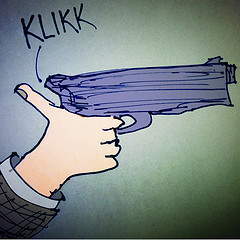 Playwright Anton Chekhov had a favorite literary concept now known as “Chekhov’s Gun.” There are a few ways to state it, but essentially, if a gun appears prominently in the first act of the play, it had better play some role by the final act, or else the audience will feel cheated.

This concept could be described as foreshadowing, but really it boils down to a very basic architecture of storytelling, the setup-payoff model. And the more you’re around stories, the more you realize how very ingrained this architecture is and how many facets it has, particularly in the Western tradition. Hopefully we can generate a couple of fresh perspectives with the setup-payoff model that can help with your own storytelling.

In Chekhov’s case, the gun was “set up” in the first act. Well, what does that mean? A lot of setting up has to do with prominence, which is a wishy-washy term but is nonetheless useful to think about. If the gun was merely one small part of a living room’s production design, and it was not called attention to by any character, lighting technique, etc., then it was not set up properly (if there is indeed a payoff at the conclusion of the play where a character uses the gun to threaten violence).

So, part of setting up and paying off has to do with the literary real estate you give to an item, theme, character, etc. If in your story you are taking pains to describe a particular item, chances are you are building an expectation that that item will be paid off; that is, that the item will reappear in some important way that impacts your plot. When we talk about “plot holes” or “gaps” or “loose threads” in a narrative, we are almost always talking about either a) setups that were not properly paid off, or b) payoffs that were not properly set up. Using a little reverse logic, then, if a story contains proper setups and proper payoffs, in roughly equal weights, that story has captured the essence of satisfying storytelling.

And really, so much of the stories we tell in whatever medium can be reduced to this extremely simple but endlessly compelling relationship. It’s not just items, of course, but themes and characters themselves, either on a macro or micro level. In Dickens’ A Christmas Carol, Scrooge’s transformation into a generous, happy man (the payoff) would not have nearly the power it does if most of the story wasn’t dedicated to depicting what a grouch and miser he was (the setup).

The lesson to take away from this model and from Chekhov’s Gun is two-fold. When you’re “stuck” in your writing, reduce your problem to a matter of setup and payoff. Chances are, the solution will present itself because the setup and payoff are so organically related (or at least should be). Secondly, Chekhov’s Gun is a lesson in the power of brevity. When you overwrite, you actually run the risk of upsetting the precarious balance between setup and payoff. Obeying the tradition of setups and payoffs will keep your prose lean and purposeful.

This entry was posted on Wednesday, June 1st, 2011 at 1:31 pm and tagged with blogging, Chekhov's gun, hidden gun, payoff, set-up, storytelling, writing and posted in ascentive. You can follow any responses to this entry through the RSS 2.0 feed.
« Where to watch out for Cyberbullies
Hackers prank Tupac hoax on PBS website »

2 responses to “The Setup-Payoff Model of Storytelling”